Yvonne Murray's request for her 1988 Olympic bronze medal to be upgraded because of state-sponsored drug taking by Russian athletes has been rejected.

Russia's Tetyana Dorovskikh took the 3,000m gold medal but tested positive for drug use in 1993.

"Their view is that they can't prove that Dorovskikh was on drugs when competing at Seoul in 88 when she tested positive in 93," he said.

"Our view is that you don't start taking drugs after winning the numerous titles she had.

"It is quite sickening really and something that has to be addressed otherwise sport's going to die at the top end."

Having originally written to the IOC in June 2015, Murray's hopes of an upgrade increased when Russia was first accused by the World Anti-Doping Agency of "state-sponsored" doping in November.

"I thought, if we don't do something now, we never will and I decided to write to the IAAF, Sebastian Coe, the president, and Thomas Black, who's president of the International Olympic Committee," Mooney told BBC Scotland.

"Seb Coe got back to say it is really an IOC matter but he would raise it with them." 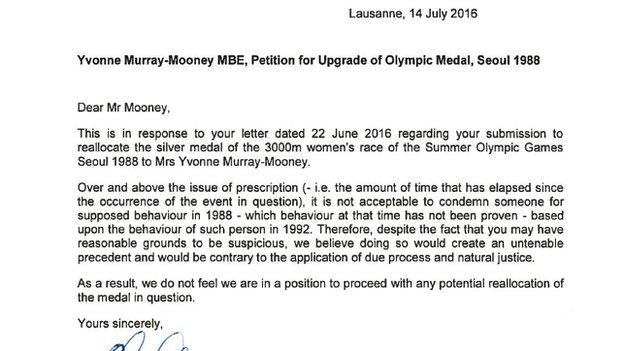 More than a year after his initial letter, Mooney has been left disappointed by the reply, which comes as Russia failed to overturn the ban imposed on its athletes competing at the forthcoming Olympics in Rio.

"Dorovskikh tested positive for performance enhancing drugs in 1993," he said. "Subsequent to that, she had won four world championship gold medals and three Olympic medals, including a gold medal in Yvonne's race in the 3,000m in 1988.

"It is something that has always been sore with Yvonne. She has always felt she should have been upgraded to at least a silver medal from the Games."

The rejection of Murray's appeal came in a letter from IOC director of legal affairs Howard Stupp.

"Over and above the issue of prescription (ie, the amount of time that has elapsed since the occurrence of the event in question), it is not acceptable to condemn someone for supposed behaviour in 1988 - which behaviour at that time has not been proven - based upon the behaviour of such person in 1992," he stated.

"Therefore, despite the fact that you may have reasonable grounds to be suspicious, we believe doing so would create an untenable precedent and would be contrary to the application of due process and natural justice.

"As a result, we do not feel we are in a position to proceed with any potential reallocation of the medal in question."