Coach Toni Minichiello has been by Jessica Ennis-Hill's side through the highs and the lows of her golden career.

From her early days as a prodigious youngster, the career-threatening injury, the comeback and first world title to the iconic gold at London 2012.

Then came Ennis-Hill the mum, a second world title and her final act, a silver at Rio.

Minichiello has seen it all and tells BBC Sport why the "hard-working mum" deserves her place as Britain's greatest ever athlete.

'After Reggie, she was a mum who did athletics'

"How would I describe Jess in three words? A hard-working mum.

"Leading into London she was an athlete first and foremost. But after her son Reggie was born she was a mum who did athletics. That is a lovely example, look at her, how she changed, she became just a mum with a hobby.

"The World Championship medal in 2015 and the Olympic medal at Rio was more about doing something for her son; her son would see that and have an affinity with it. He is very sporty, and can throw a broom handle thinking it's a javelin.

"He has seen his mum, whatever memory he may or may not have, he will have experienced what his mum's reputation will always be."

"I met Jess when she was nine. I was teaching on summer camps at the time and I saw this kid who stood out from her peers because she was just that bit quicker.

"She only came down because her friend came down but she stuck with it and the friend went in a different direction.

"Jess kept exceeding and exceeding expectations, people criticised her for being too small, said she'd never make it. They said my coaching was no good. But I was like 'no, come and see this kid, what she does, she is tenacious, a highly-competitive individual'.

"She can be a pain, she is always ultra competitive. She gets it from her mum, even lobbing a drinks bottle into a bin from five metres.

"Her best quality is her ability to be ultra competitive but be incredibly grounded and modest. She is critical of herself. She does not say 'look at me, the great I am'. She is modest and strives to be better and has an incredible work ethic. You could not ask for any more. She got her physicality from her parents and add that to the work ethic and competitive bit; bring all that together and you have lightning in a bottle.

"She has always been sassy and was a cheeky little kid. But she has that determination to do better and never be satisfied with her performance."

"For me, the highlight of her career wasn't London 2012, but coming back from pregnancy and winning the World Championship in Beijing in 2015.

"Number two would coming back from three stress fractures in her foot and winning her first World Championship in 2009 because that was potentially a career-threatening injury. The home Olympics was big but in my perspective overcoming adversity was better.

'Normally it's three men and a dog'

"London was superb, but a bit surreal because the crowd were so supportive. It wasn't quite the same pressurised environment. Normally on the first day of a heptathlon it is three men and a dog, but it was packed.

"I have two great memories from London. The first was when she was introduced in the last heat of the 800m. They went down the line and when the announcer got to lane eight - Jess' lane - he was drowned out by the noise of the crowd.

"The second was so many people staying in the stadium for the medal ceremony and singing the national anthem. It was the first gold medal and the first time the stadium heard the anthem."

"After Rio, I said 'go and take two or three months and make sure you're happy with the decision'. There will be no comeback, no Frank Sinatra moment, it won't be that, even though you get good odds for her to compete at Tokyo... the bookies were offering 10-1.

"She had the shortest competitive preparation for Rio with injuries and it was not the most sensible competitive programme to try and retain an Olympic title. It had been a struggle, three injuries to get over and her body was not as forgiving as it was. She had this in mind when she made a judgement call about competing at the World Championships in London in 2017.

Find out how to get into athletics with our special guide.

"It was time. In fairness there is a new generation of British athletes coming through and the hope is they can step up and succeed. It's their moment, no need to dwell on the past, her time has been.

"I will miss it, I like going to major championships, I like the buzz. But I have a whole new crop and hopefully have one or two who can make it."

'Daley never gave birth and came back and won' 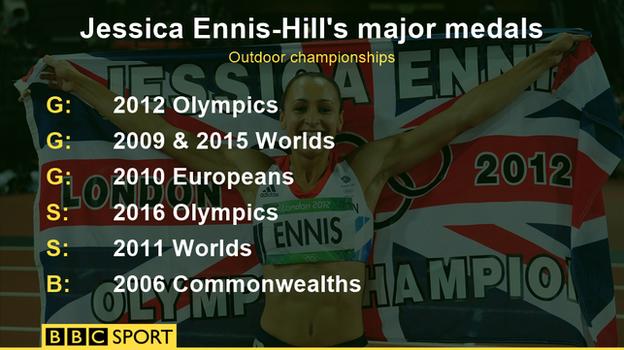 "If you look at somebody who in a career has won a medal at the youngest stage and gone all the way through to winning an Olympic medal, the changes that you had in that lifetime, that defines a career.

"She is better than Daley Thompson, he never gave birth and came back and won, he trained and trained. To balance her home life and do that makes her the best British athlete ever."