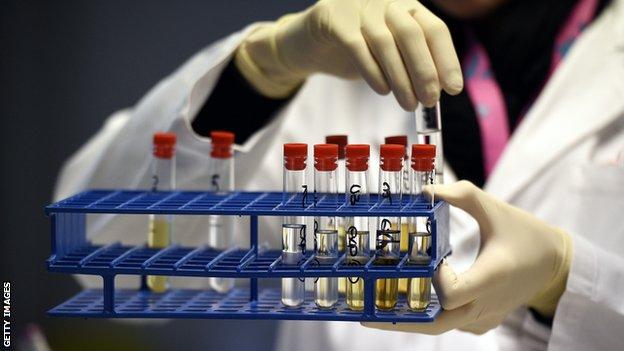 Russia should be banned from both competing in and hosting international sporting events, say the leaders of 19 national anti-doping organisations.

More than 1,000 Russians benefited from a state-sponsored doping programme between 2011 and 2015, according to a report released last month.

National anti-doping organisations (NADOs) from around the world met at a special summit in Dublin on Tuesday.

They hope their proposals will "help sport move past these dark times".

Russia, which is due to host the football World Cup in 2018, last month gave up a World Cup biathlon meeting set to be held in March and was stripped of a speed skating meet for the same month.

It also lost the right to host the 2017 bobsleigh and skeleton World Championships.

At least 30 sports were implicated by the second part of the report into Russian doping by lawyer Richard McLaren.

He said the London Olympics were "corrupted on an unprecedented scale", while medallists at the 2013 World Athletics Championships and the 2014 Winter Olympics were also implicated.

The NADOs said Russian sports bodies should be banned until a credible anti-doping system was in place, and suggested a "uniform process for athletes to compete as neutrals" until reforms are made.

They added: "It is imperative that those responsible for Russia's state-supported system are held accountable."

The group backed the World Anti-Doping Agency (Wada) as the global regulator, but reiterated the need for a "truly independent anti-doping model".

Russia has always denied allegations the state was involved in doping, and officials say they are making progress in cracking down on drug cheats.