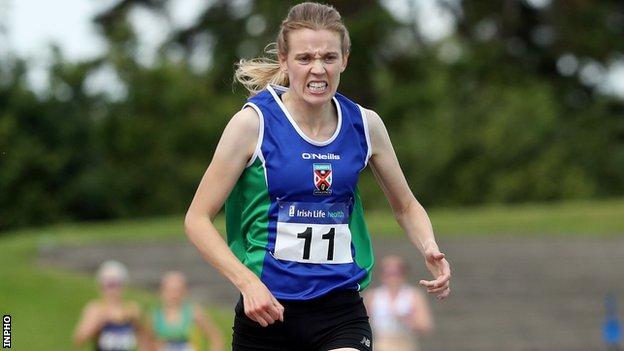 Commonwealth Games hopefuls Emma Mitchell and Adam Kirk-Smith both clinched gold medals on the opening day of the Irish Championships at Santry.

Mitchell won the women's 5,000m title as she clocked 16:27.08 to finish over eight seconds ahead of Letterkenny's Annmarie McGlynn.

His winning time left him over 22 seconds ahead of runner-up Clonliffe's Jayme Rossiter.

World Championships-bound Mageean clocked 2:11.92 which left her ahead of City of Lisburn's Kelly Neely, who ran 2:13.13 to also progress.

Letterkenny man Mark English won his 800m heat in 1:53.35 to qualify for the men's decider.

Raheny's Kevin Dooney won the men's 10,000m title in 29:30.16 as he finished over five seconds ahead of marathon specialist Mick Clohisey.

Cork athlete Phil Healy won the women's 200m title in 23.56 seconds while Carrick-on-Shannon's Eanna Madden was just outside 21 seconds as he took the men's title in 21.07 with Clonliffe's Jeremy Phillips second in 21.14.

Marcus Lawler was an absentee from the men's event because of injury with Amy Foster skipping the women's 200m to concentrate on Sunday's 100m.

In-form Brian Gregan led the qualifiers for Sunday's 400m final where Ballymena & Antrim's Craig Newell will also be in action.

Sunday will be the main day of finals action at the Santry meeting with Thomas Barr and Kerry O'Flaherty, Ben Reynolds and Adam McMullan among the athletes who will compete, while Mitchell will aim to complete a double in the women's 1500m final.