Dina Asher-Smith won her third gold medal of the European Championships as she led Great Britain to victory in the women's 4x100m relay final in Berlin.

The 100m and 200m champion ran a superb final leg to pass Germany, Switzerland and Netherlands in the final 30 metres for a fitting end to her campaign.

Britain then won the men's 4x100m relay in the final event of the competition. 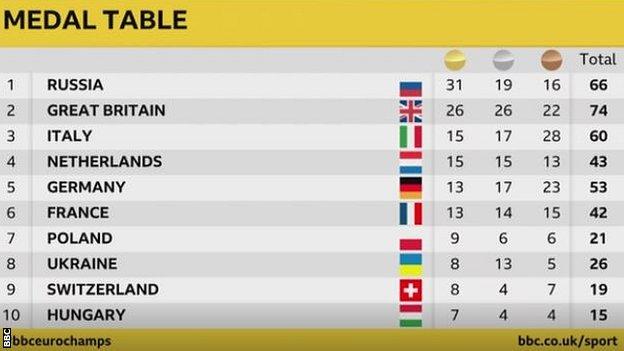 They finished second in the overall table, behind Russia, in these inaugural multi-sports championships, winning 74 medals - 26 gold, 26 silver and 22 bronze.

Russian team members were awarded a trophy for topping the medal table at the closing celebrations in George Square, Glasgow.

Other highlights on the final day

Asher-Smith became the first woman since German Katrin Krabbe in 1990 to win three European sprint titles at one championships.

Asha Philip and Imani Lansiquot ran the first two legs before Bianca Williams handed over to the anchor. The 22-year-old was in fourth spot but produced a blistering run to cross the line in a world-leading 41.88 seconds. Netherlands took silver (42.15) ahead of Germany (42.23).

"I'm just honestly so proud. You go in aiming for this, but you never know if it will be possible," Asher-Smith told BBC Sport.

"I'm so grateful for all these girls for putting out their best for our country and coming home with gold."

Harry Aikines-Aryeetey, who replaced the injured Nethaneel Mitchell-Blake, had a slightly easier job on the final leg of the men's 4x100m relay.

Team-mates CJ Ujah, 100m champion Zharnel Hughes and Adam Gemili ensured Aikines-Aryeetey had a good lead when he took the baton. The 29-year-old crossed the line in 37.80 seconds, with Turkey second (37.98) and Netherlands third (38.03).

Hughes, 23, who leaves Berlin with two titles, said: "The guys held their composure, we stayed relaxed.

"This team is so strong, we have such depth. I'm really grateful to come away with two gold medals."

Muir came into the final as the pre-race favourite despite having not won a gold medal in any of the major outdoor competitions.

Sunday's race began at a slow pace before Muir decided to move to the front and increase the pace. Team-mate Weightman, who won bronze in 2014, followed her as she stretched the field.

Poland's Sofia Ennaoui overtook Weightman in the home straight and began to close the gap on Muir, but the Scot held on to finish in four minutes 02.32 seconds.

"I just knew the girls had a good finish so the longer I left it the riskier it would be so I just ran as hard as I could for the finish line," Muir told BBC Sport. "It was great Laura could get in behind me too."

"It was probably the most pressure I've been under in terms of the level of expectation to win, it was something new for me and I think I've handled it really well.

"I'm just thankful for the support I've had from back home and here as well."

One of the more unusual spectacles of the final athletics session came in the women's 5,000m

With 700 metres remaining, eventual winner Sifan Hassan led with Lonah Salpeter close behind. The Israeli athlete then made a burst for the line assuming it was the end of the race - she celebrated silver before realising her mistake once the final-lap bell sounded. By this point Salpeter had already lost her position to McColgan and then saw Turkey's Yasemin Can pass her to take bronze.

There were Britons in Sunday's other finals - Kent-born Rosie Clarke was 10th in the women's 3,000m steeplechase, Nathan Douglas was sixth in the men's triple jump and Sophie Hitchon finished eighth in the women's hammer.

The best of the European Championships