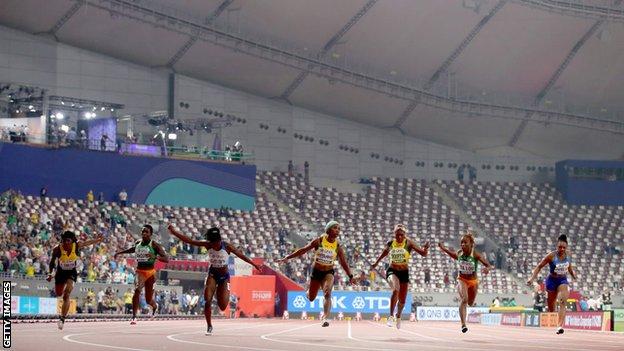 The IAAF is "disappointed" by the small crowds at the World Championships in Doha but believes athletes are still enjoying a "positive experience", says its chief executive Jon Ridgeon.

Denise Lewis is among several current and former athletes to comment, saying it was "absolutely shocking".

"Rest assured we are working really hard with the local organising committee to generate bigger crowds."

Speaking on BBC Two, he added: "I think one of the biggest challenges has been, if you look back to a couple of days ago, we did actually fill 65-70% of those available seats, but by the time the big finals came along later in the evening, actually a lot of the audience had gone home because the working day starts early the next morning.

"When you judge a championship, clearly the size of the audience and the atmosphere created is one really important element, but there are other elements as well, and I think we can all agree the athletics has been stunning."

The stadium holds 40,000 people but its capacity was cut to about 21,000 for the championships, which were awarded to Doha in 2014 ahead of Barcelona and Eugene in Oregon, USA.

Qatar was placed under an economic blockade by four of its neighbouring countries in 2017 and Ridgeon believes it has played its part on audience numbers.

"You must remember when this event was awarded six or seven years ago, it was always positioned as a celebration of athletics within the Middle East," he said.

"Clearly, geo-politics has shifted since, there is a blockade of this country from all the neighbouring surrounding countries and that has impacted.

Asked by host Gabby Logan if the IAAF was blaming the small crowds on the blockade, Ridgeon said: "We would like more people here, but you have to accept this is a small country. There are some 700,000 residents here in Doha, and it was always positioned as a celebration of the whole region.

"There would be an awful lot more people here if the blockade was not in place. The blockade is one of the factors."

He added: "I'm not blaming it, but it's one of the factors, but you have to understand the political challenges this country faces right now, which was never envisaged when this meeting was awarded."

'Important progress is being made'

In a statement earlier on Monday, the Doha 2019 organising committee said it was confident its "renewed efforts" would encourage more to attend the championships.

It revealed attendance had reached 70% and 67% on the first two days of the event but numbers fell to below 50% on day three, when Britain's Dina Asher-Smith won 100m silver behind Jamaican Shelly-Ann Fraser-Pryce.

"We are confident that our renewed efforts will encourage the local community to come and witness the stunning performance of the world's best athletes," said a spokesperson.

"The challenge we face with a competition schedule that is geared to support global TV viewership, is that some finals are not starting until the late evening. This impacts on the number of spectators remaining until the end of the session.

"We are confident with our additional communications, we will see more attendees for longer periods."

It added: "The pattern of the attendance so far follows the interests of the local community, with middle and long distance races pulling in the biggest crowds, rather than traditional sprint events.

"Our vision was for a first world championship in the Middle East. An IAAF World Athletics Championship that would welcome the world and connect to new fans. Despite facing unique challenges as hosts, in terms of the political blockade, that ambition remains.

"Whether it is understanding athlete performances in endurance events or stadium design, this championship is benefitting world sport and important progress is being made."

More from the World Athletics Championships