What will be the name to remember from Tokyo's 2020 track and field programme?

One Thursday last February, a group of Nike shoes designers filed those designs at the US Patent Office, aiming to bring their ground-breaking Vaporfly technology to athletics' most high-profile events.

Nine days later, across the Atlantic in Birmingham, Laura Muir broke the British indoor mile record in a pair of prototype shoes designed along similar lines.

No more. For now at least.

World Athletics ruled on Friday that Vaporfly technology was generally legal, but specified that elite athletes' shoes must be available for purchase by the general public.

A version of Eliud Kipchoge's marathon footwear is on sale in your local flagship store. Muir and Hassan's spikes are not.

But, with a generous 30mm sole-depth limit brought in for spikes, that is the only barrier to be cleared before track-specific Vaporfly shoes are legal for Tokyo 2020.

A deadline of 30 April has been set by World Athletics. If they are in the shops by then, they can be on track in time for the Olympics.

What difference does Vaporfly make?

On the road, the evidence for Nike's pioneering shoes has been compelling.

A New York Times study of data from more than a million races suggested even Nike's own hype might be an under-estimate.

At the elite end of things, the five fastest marathon times of all time, a new women's world record and Kipchoge's astonishing sub-two hour stunt in Vienna, have all been achieved in the past 17 months. All wearing Nike.

Geoff Burns is an ultra marathon runner who has represented the United States at World Championships.

"They're fascinating to put your feet in," he says of his experience trying Vaporflys.

"That foam is extremely resilient. It feels very soft, but then you start moving and you can feel it respond to your foot strike, compress and give that energy back. 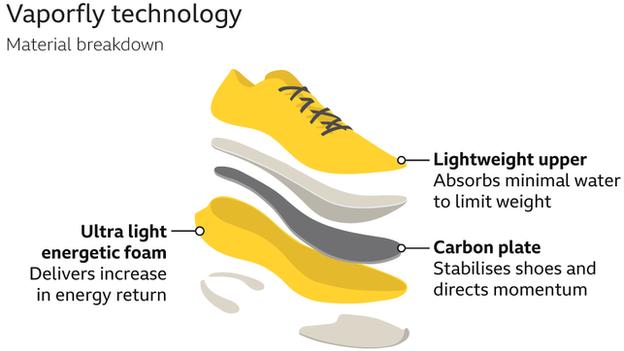 "With that plate, you feel yourself kind of falling forward, the shoe propagating your momentum.

"It's like the shoe begs to be run in and run fast. They are what would what everyone says - the impression is very real and not oversold."

As an athlete he can feel the difference. As a biomechanist studying at the University of Michigan's Performance Research Lab, Burns also understands it.

"It's not one thing," he says. "The foam, the carbon plate, the way the two are combined and positioned in the shoe all act in concert as a system.

"Together they more efficiently store and return energy with each step and extend the effective leg length of the runner with a lighter, more perfectly elastic, resilient non-biological element."

For track athletes, it is not as simple as strapping on a pair of Kipchoge's 4cm-thick soles.

They need a lighter, more responsive shoe for stability out the blocks or evasive action in the bump and hustle of a middle-distance race.

Nike's sprint solution, from prototype images and various patent applications, appears to be a stiff carbon plate beneath a thinner pressurised air bladder.

One anonymous sportswear executive, speaking to the Times this month, raised the prospect that they may help Coleman lower his 100m personal best from 9.76 seconds to well below Usain Bolt's world record of 9.58.

Burns thinks such fears might be extreme, but that Vaporfly spikes could offer an advantage that proves the difference between being on podium and being a footnote.

"I would suspect that the fundamental advantage that you have with those sprint spikes is that you are extending the effective limb of the runner," he adds.

For longer-distance track events, many athletes won't wait for a spiked version of the Vaporfly to emerge.

A 2018 study showed that Vaporfly shoes designed for road running were more efficient than spikes on the track.

American triathlete-turned-track athlete Gwen Jorgensen had the best of both worlds, running in a custom-made mash-up at the US Championships in 2018 with a plate of spikes fused to the bottom of a Vaporfly road shoe.

A PR boost for a beleaguered Nike?

Nike's public image as been tarnished by a succession of scandals in elite athletics over the past six months. But the prospect of their technology being at the centre of Olympics success may not be the boost that you would imagine.

As the world's biggest sports brand, high-performance running shoes make up only a fraction of it's business.

The notoriety of a ban could even have been a useful marketing prop in itself. The company has successfully fuelled the mythology around the Air Jordan 1 shoe which flouted NBA uniform rules in the mid 1980s and has been reissued in various retro guises since.

If Nike were in a potential win-win situation, World Athletics' decision is stark for others.

The Hakone Ekiden is a distance-running relay event that pits teams of amateur runners against each other over two gruelling days. It is one of the most-watched events in Japanese sport with blanket television coverage and crowds lining the course.

This year, on the 100th anniversary of the race's first running, there was a change in the event's age-old traditions.

Runners in the race, more commonly shod in domestic distance-running specialist brands like Asics and Mizuno, had switched en masse to Nike. By one account, 84% of the field were wearing Vaporfly variants.

Now they, like the athletes left in Nike's wake, are playing catch-up just as the world's attention turns on their homeland.