Nike's controversial Vaporfly range will not be banned but there will be tighter regulations around high-tech running shoes, World Athletics says.

Any new shoe technology developed after 30 April will have to be available on the open market for four months before an athlete can use it in competition.

World Athletics has also introduced an immediate indefinite ban on any shoes that have a sole thicker than 40mm.

The body will also investigate any shoes that "may not be compliant".

An immediate indefinite ban has also been introduced on any shoe that contains more than one "rigid embedded plate or blade".

For shoes with spikes, an additional plate or blade is allowed for the purpose of attaching the spikes, but the sole must be no thicker than 30mm.

The 'Alphafly' prototype shoes worn by Eliud Kipchoge when he became the first athlete to run a marathon in under two hours in October 2019 will be banned.

A group of experts were asked to consider whether Nike's Vaporfly shoes give their wearers an unfair advantage.

World Athletics president Lord Coe said: "It is not our job to regulate the entire sports shoe market but it is our duty to preserve the integrity of elite competition by ensuring the shoes worn by elite athletes in competition do not offer any unfair assistance or advantage.

"As we enter the Olympic year, we don't believe we can rule out shoes that have been generally available for a considerable period of time, but we can draw a line by prohibiting the use of shoes that go further than what is currently on the market while we investigate further.

"I believe these new rules strike the right balance by offering certainty to athletes and manufacturers as they prepare for the Tokyo 2020 Olympic Games, while addressing the concerns that have been raised about shoe technology.

"If further evidence becomes available that indicates we need to tighten up these rules, we reserve the right to do that to protect our sport."

World Athletics will now establish an "expert working group" to "guide future research" into shoe technology as well as assessing any new shoes that enter the market.

Why are the shoes controversial? 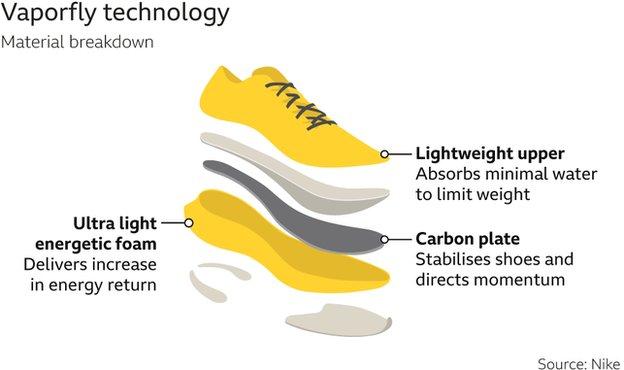 The shoes have been criticised for "distorting the record books", with some arguing they prevent fair competition with athletes not sponsored by Nike.

Vaporflys claim to improve an athlete's performance by 4%, and the five fastest marathons of all time have been run in the past 16 months by athletes wearing varying forms of the technology.

"It's up to World Athletics to provide a level playing field for all... to be brutally honest, it's hard to see how anybody not wearing Vaporflys at Tokyo is going to win medals," she said.

"Athletics has had several years of doping stories coming out in the press and the single most important thing is to restore trust and bring in more fans and sponsors.

"But if we see every medal winner wearing the Vaporflys and other athletes not getting a look in, I'm not sure that people watching can really say I believe that performance 100%."

Nike said in a previous statement they "respect the spirit of the rules and we do not create any running shoes that return more energy than the runner expends".

Amid mounting confusion that running was becoming distorted, World Athletics has tried to provide some clarity before the Tokyo Olympics and halt what some see as an 'arms race' in shoe technology.

Although more research will now be conducted and the rules could still develop, it seems significant the governing body admits "concerns that the integrity of the sport might be threatened".

The news will come as a relief for Nike and the athletes it sponsors.

But as expected, the Vaporfly range that has revolutionised distance running is cleared, including the 'Vaporfly Next%' that Brigid Kosgei wore when smashing the women's world record last year.

That will lead to fears that the new restrictions have been conceived with that shoe's specific dimensions in mind, are too little too late, and mean athletes sponsored by other manufacturers are at a disadvantage.

They have three months to do so. After that they will need to have been widely available to buy for four months before being allowed in elite competition, ruling out their use at the Olympics.