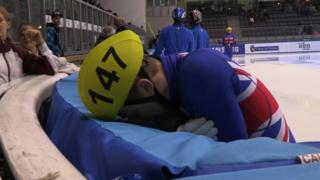 Britain's men and women both failed to get out of their relay heats in a vital Olympic qualifying tournament in Turin on Friday.

The result leaves them needing strong performances at next week's final qualifier, in the Russian town of Kolomna, to stand a chance of making the Games.

If the relay teams do not qualify, a number of the nine-strong British squad will miss out entirely on Sochi 2014. While GB have never previously qualified a women's relay, the men's team has performed well on the world stage in recent years.