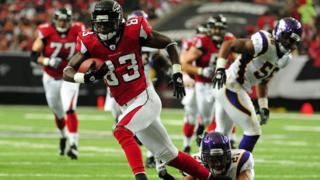 Watch a countdown of the top five catches from the best NFL plays during week six, including an unlikely grab from Harry Douglas of the Atlanta Falcons after the football hits his opponent.

Watch a full replay of the Denver Broncos at the San Diego Chargers on the BBC iPlayer now or on the Red Button at 22.00 BST on Tuesday.