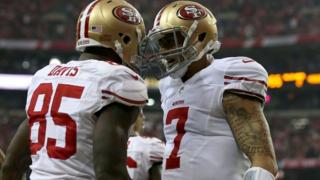 The Niners, led by quarterback Colin Kaepernick and star running back Frank Gore, fought back from 17-0 down to beat Atlanta Falcons 28-24 and take the NFC title.

Watch full highlights of both matches on BBC iPlayer.

Available in to UK users only.