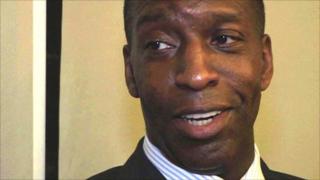 Relay too much for Bolt - Johnson

Michael Johnson says Usain Bolt will be unable to fulfil his dream of winning four gold medals at London 2012, after the Jamaican 100m and 200m world record holder revealed his ambition to compete in the 4x400m relay.

Despite Johnson believing Bolt "could be a world record holder at 400m", the former Olympic 200m and 400m champion says he "cannot see the Jamaican coaching staff putting him on the 4x400m relay unproven" and states training for the longer distance would be an "absolute distraction" from the 100m, 200m and 4x100m relay.

You can hear the full interview with Michael Johnson on BBC Radio 5 live's London Calling programme with Eleanor Oldroyd on Thursday at 2100 GMT.