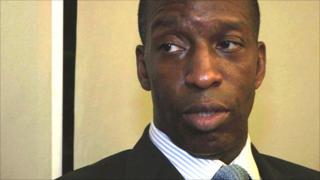 Michael Johnson believes the potential disadvantages of a home Olympics will outweigh any advantages for British athletes during the 2012 Olympics.

Johnson won gold in the 200m and 400m in Atlanta in 1996, and says British athletes should try to "recreate [the] sense that you are not at home" in order to avoid "being lulled into a false sense of security" and relaxing "a little bit too much".