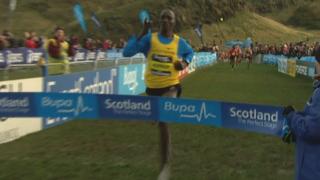 Kenya's Asbel Kiprop gets 2012 off to a winning start as he comfortably beats Great Britain's Jonny Hay and compatriot Eliud Kipchoge to win the men's 3km at the Great Edinburgh International Cross Country.

After winning the race, the world and Olympic 1500m champion tells BBC Sport's Jonathan Edwards that he feels he has proven a point by winning in Edinburgh and says he is looking forward to competing in the Olympics in London later this year.