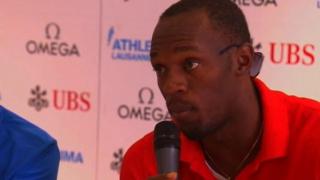 Sprint legend Usain Bolt says he is not trying to break world records at the moment because he just wants to finish the season without injury.

The six-time Olympic champion and multiple world record holder will run in the 200m in Lausanne on Thursday, while the Jamaican's compatriot and training partner Yohan Blake - beaten into second place in both the 100m and 200m at London 2012 - will run over the shorter distance in Switzerland.

Blake says he is also hoping to stay injury free and adds he is concentrating on building his legacy, rather than worrying about anyone else.