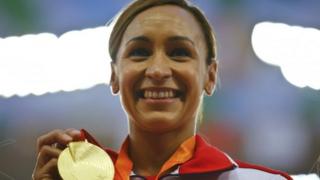 The reigning Olympic champion was competing in her first major competition since London 2012 in China, but took the title just 13 months after giving birth to her son.

Ennis-Hill says this time last year she "could not imagine stepping onto a track and performing, let alone being at the World Championships and winning".