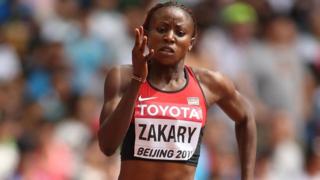 Watch the moment Kenya's Joyce Zakary sets a national record in the 400m heats at the World Athletics Championships.

The International Association of Athletics Federations announced that Zakary, 29, has been given a provisional ban after failing a test for banned substances.

Zakary set a national record of 50.71 in heat three of the 400m on Monday, but has now been provisionally banned alongside compatriot Koki Manunga.