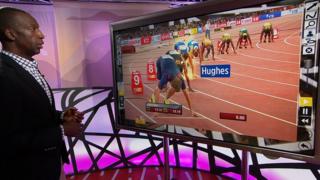 Hughes crossed the line in 20.14 seconds to set up an exciting 200m final against the world's fastest man Usain Bolt and Justin Gatlin.

Coverage of the 200m final will be live on BBC Two and online on Thursday at 13:55 BST.