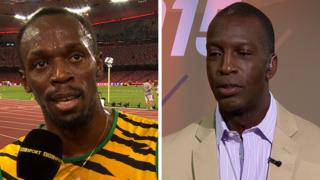 Usain Bolt has a jovial message for Michael Johnson, who the Jamaican felt had doubted his 200m chances before he claimed World Championship gold.

The double sprint world champion also thanks all of his fans for their support and promises he will continue to dominate the sport.

American great Johnson responded by claiming that he had always been backing Bolt.