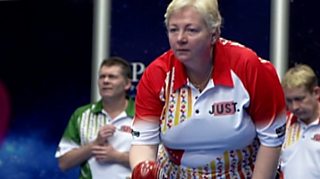 Where is bowls' answer to darts sensation Fallon Sherrock? BBC Look East visits the World Indoor Bowls Championships, which has no women in the main draw for the third year running.

Janice Gower was the last female player to qualify in 2017 - with Beverley Polatinsky saying men play "more aggressively" - while World Bowls Tour CEO Richard Maddieson and world number two Greg Harlow think female players should continue to have to qualify for the event, rather than be given invitations.

Eighteen women tried to qualify for the main draw, with eight instead competing for the ladies' title.