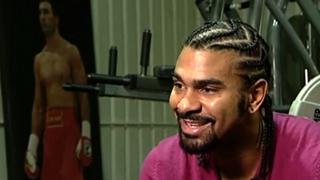 Boxer David Haye announces his official retirement from the ring on his 31st birthday and says he now plans to launch an acting career.

Haye's last fight was against Wladimir Klitschko on 2 July, .

Haye says he always planned to quit boxing at the age of 31 and insists he will not be making a return to the ring, regardless of the potential opposition.

England slump to 170-7 against dominant India