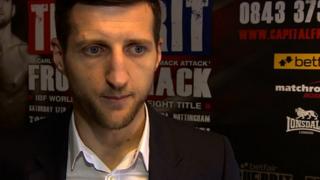 World super-middleweight champion Carl Froch says he is aware that his next opponent, Yusaf Mack, has "nothing to lose" when they fight for Froch's IBF title in November.

The Nottingham veteran defends his belt for the first time after becoming a three-time world champion by beating Lucian Bute in May.

Froch is regarded as the overwhelming favourite against Philadelphian Mack, who is dropping down in weight for the bout, but the 35-year-old says he realises it will be a tough fight.