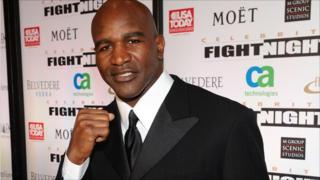 Four-time world heavyweight champion Evander Holyfield says he is "winding down" because he cannot get the title fights he wants.

Holyfield is auctioning some of his possessions, and although he denies it is out of necessity, he admits that the money raised "wouldn't hurt".

The 49-year-old American says WBC title-holder Vitali Klitschko and Wladimir Klitschko, who holds the WBA, IBF and WBO belts, have turned down the chance to fight with him.