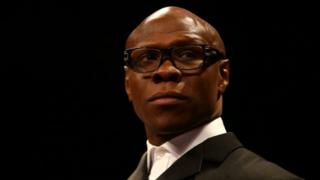 Chris Eubank performs an impromptu recital of Rudyard Kipling's poem 'If' during an interview about his son, Chris Eubank Jr.

Eubank Sr has asked his son to learn the poem to inspire him, with the former middleweight and super-middleweight world champion claiming during an interview with BBC Sport's Tim Hague, that his son is the most talented boxer since Sugar Ray Leonard.