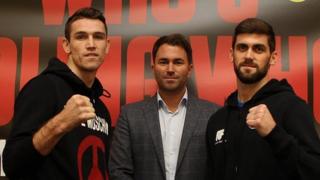 Another Smith on the verge of history

Super-middleweight boxer Callum Smith could make history on Saturday when he becomes the fourth of the Liverpool-based brothers to win a British title.

Smith, 25, takes on local rival Rocky Fielding at Liverpool's Echo Arena, in a fight that has split the city.

Both fighters are undefeated, although Smith is being tipped as the slight favourite to win - something Fielding says he does not mind.

From tennis outcast to trans pioneer