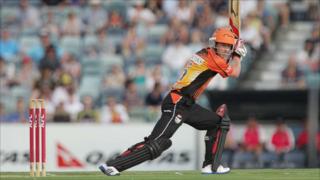 Paul Collingwood tells the BBC's Test Match Special that getting back into the England one-day side is what "motivates and drives" him to continue playing the game, though he admits it would take "something miraculous" for him to regain his place in the international set-up.

Collingwood, currently captaining South African Twenty20 side The New Age Impi, believes England's Test side is still "exceptional" despite the series whitewash by Pakistan, attributing the team's slump to their taking an unfamiliarly long break before the series began in the UAE.

The Durham all-rounder, who lifted the World Twenty20 trophy as England's T20 skipper in 2010, retired from Test cricket in January 2011.