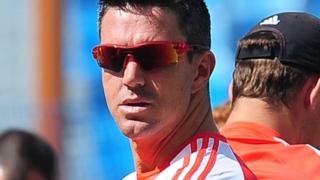 England team director Andy Flower admits there are "trust and mutual respect issues" which need to be resolved between England and Kevin Pietersen before both parties can move forward.

Pietersen was dropped for the third Test against South Africa after allegedly insulting Test captain Andrew Strauss in texts to the tourists.

The 32-year-old has been left out of England squads for both the World Twenty20 tournament and the preceding one-day series against South Africa.