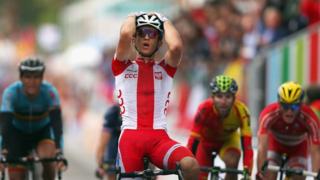 Poland's Michal Kwiatkowski wins the World Championships road race by one second after breaking clear from the peloton with four miles to go in Spain.

Kwiatkowski attacked on the penultimate climb on the last of 14 laps and held off the chasing pack in Ponferrada.