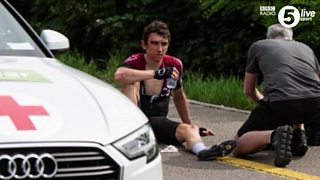 Geraint Thomas takes you inside the mind of a cyclist during a high-speed crash.

The reigning Tour de France champion avoided serious injury after a collision during the Tour of Switzerland on Tuesday. Thomas' incident was the second big crash from a Team Ineos rider this month after Chris Froome, travelling at 54km/h, hit a wall during a practice ride at the Criterium du Dauphine.

Speaking to the BeSpoke podcast, Thomas says crashing "is part of the sport, but the worst bit by far".