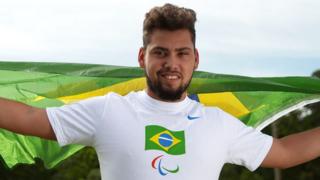 Brazilian Paralympic champion Alan Fonteles Oliveira - who beat Oscar Pistorius to T44 200m gold at London 2012 - tells BBC Sport's Nick Hope he would like to see the blade runner return to racing so they can race again.

Pistorius is currently serving a five-year custodial sentence for shooting dead his girlfriend Reeva Steenkamp in 2013, however, reports at the time of his conviction in October last year suggested he could be released from prison after just 10 months.

Oliveira, who is expected to be one of Brazil's leading Paralympic medal prospects at the Rio 2016 Games, dismisses concerns about his physical condition after taking a year out from the sport and also revealed he would like to follow Pistorius and compete at a future Olympic Games.