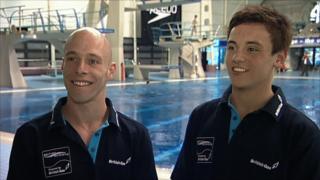 Daley partnership 'improving all the time'

Tom Daley and his synchronised diving partner Pete Waterfield, speaking ahead of their participation in the world series in Sheffield, say they have gelled together really quickly but still enjoy being in competition with each other in the individual event.

BBC Sport will be streaming the event live on the Red Button and on bbc.co.uk/sport. All times BST.

This the third of the four-event Fina Diving World Series, following competitions in Moscow and Beijing.

Daley, 10m World and Commonwealth champion, has had a tough start to the season after adding four new dives to his solo routine as he seeks to up his difficulty tariffs.

He finished finish fifth in the season-opener in Moscow but failed to reach the final at last month's event in Beijing, Waterfield finishing ahead of him in third.

The pair took bronze in the 10m synchro event, in their first international competitive outing.