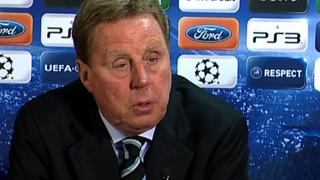 Tottenham manager Harry Redknapp refuses to pin any blame on goalkeeper Heurelho Gomes after his mistake gives Real Madrid a 1-0 win in the second leg of their Champions League quarter-final, as his side attempted to retrieve a 4-0 deficit from the first leg.

Redknapp is now focusing on the job of qualifying for next year's competition but admits it will be difficult given the amount of money spent by rivals Chelsea and Manchester City.