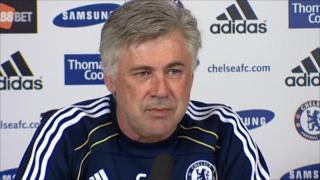 Chelsea boss Carlo Ancelotti says his side are too far behind Arsenal and Manchester United in the race to win the Premier League and insists that he still has faith in Fernando Torres as the Spaniard searches for his first goal since signing from Liverpool.