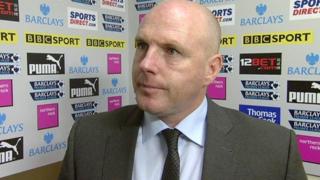 Blackburn Rovers manager Steve Kean points to a number of key decisions that went against his team as a Demba Ba hat-trick gives Newcastle a 3-1 victory at St James' Park.

Kean says the final goal was the turning point as he believes a foul on Scott Dann went unpunished.

The Scot admits the result is a "blow" to his side's confidence, but feels they could have got a point from the match had decisions gone for his team.