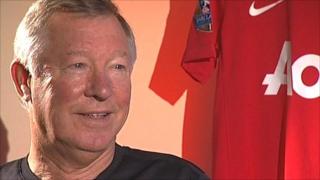 The effect of losing to Barcelona in the 2009 Champions League Final: "When Barcelona beat us in Rome there was an issue on how we could get to that level. We've made steady progress since then."

The club's youth policy: "We have a nucleus of young players aged around the 20-21 mark who can be the nucleus of what we regarded as the Giggs, Scholes, Neville, Beckham era."

His longevity at the club: "Nobody talks about sacking [me] so I can have the vision of looking two, three years ahead."

His rumoured dressing room tirades: "Myths grow all the time. If I was to listen to the number of times I've thrown teacups then we've gone through some crockery in this place. It's completely exaggerated, but I don't like people arguing back with me."

Losing: "I don't like losing but I've mellowed. I maybe have a short fuse but it goes away quicker now."

Football's future: "I feel sympathy for the working class lad. I've always championed about ticket prices and try to equate that to people's salaries. I look at some of those London prices when we go there and it's horrendous. But I think the Premier league is a strong product because there's a tremendous honesty in our game and fans play a part in that."

Players' salaries: "You can understand that clubs are desperate to win something and their imagination stretches and they end up paying silly money for players you'd never consider."