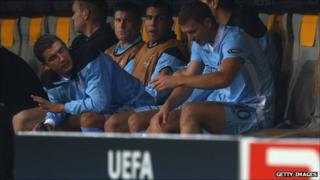 Manchester City manager Roberto Mancini has said Carlos Tevez is "finished" and won't play for the club again after the Argentine apparently refused to warm up and go on as a second-half substitute in their 2-0 defeat at Bayern Munich.

Tevez has denied that in a statement, claiming he was ready to play.

Gordon Taylor, the Chief Executive of players' union PFA, told BBC Radio 5 live Breakfast that it might be difficult to resolve the situation between Tevez and Mancini.