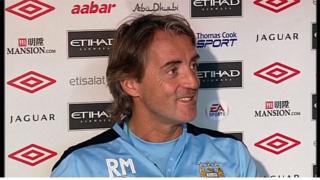 Manchester City manager Roberto Mancini says as far as he is concerned the situation concerning Carlos Tevez is "finished".

The striker appeared to refuse to come off the bench during City's 2-0 Champions League defeat at Bayern Munich, and has since been suspended for two weeks by the club.

Mancini goes on to state that it is normal to have unhappy players, but insists that morale is good within the squad.