A "really happy" Fabio Capello is pleased with the way his England team are improving after they beat world champions Spain 1-0 at Wembley.

Capello says the friendly was useful because it helped prove that young players such as Jack Rodwell and Danny Welbeck are ready to play at international level.

The England boss adds that Scott Parker, who was awarded man of the match, was "fantastic" and Phil Jones was "very good". 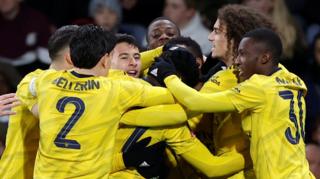