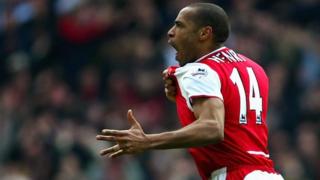 Arsenal's all-time leading goalscorer Thierry Henry scoring the "greatest" of his 226 goals for the Gunners in the Premier League against Liverpool at Highbury in April 2004.

The former captain has signed a short-term contract with Arsene Wenger's side, on loan from MLS club New York Red Bulls.