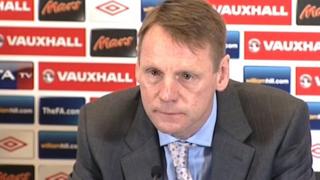 Pearce ready to manage at Euros

England's caretaker boss Stuart Pearce says he is ready to step in should the FA ask him to take control of the team for the European Championship in the summer.

The under-21 manager says he is happy to help in any way he can although he distanced himself from being the long-term candidate for the job.

Pearce adds that he has not decided who will be captain for the friendly match against the Netherlands at Wembley on Wednesday.

He says he has an idea who it could be but he wants to see the dynamics of the players in training before he announces who will get the armband.