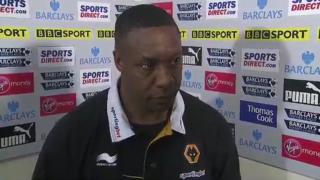 New Wolves boss Terry Connor says he "enjoyed" his first game in charge as his side battle back to a "vital" 2-2 draw with Newcastle.

Connor says he has settled into his new role with ease because he has a good understanding with the players having been at the club for 13 years.

The former assistant boss, who replaced Mick McCarthy as manager on Friday, adds that he received a goodluck message from his predecessor before the match.