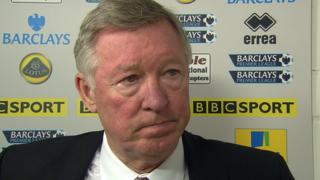 Sir Alex Ferguson hails Ryan Giggs as "an amazing man" after his late goal gave Manchester United a 2-1 win over Norwich in his 900th game for the club.

The United manager says no other player will match the Welshman's 21-year career at Old Trafford.

Ferguson believes, however, that his team were "lucky" to come out with a victory as Norwich has "played the better football", but his side should have capitalised on their lead in the first half, given to them by another veteran, Paul Scholes.