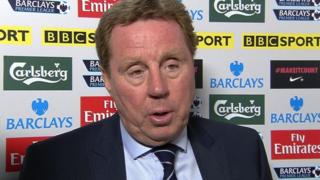 Tottenham manager Harry Redknapp says the standard of his side's defending in the 5-2 defeat by Arsenal was "disappointing" and "unlike us".

Spurs had led 2-0 after 34 minutes, but Redknapp says he could already see signs that his team were being opened up too easily.

The Tottenham boss also dismisses suggestions that speculation about his future, in regards to the vacant England manager's position, had no bearing on the result.