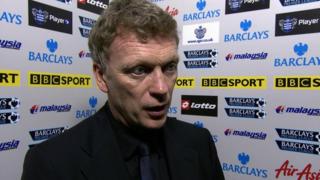 The Toffees took the lead through Royston Drenthe's 25-yard strike, but conceded a headed equaliser from Bobby Zamora only four minutes later.

Despite struggling towards the end, Everton have now extended their unbeaten run to eight games - which included a 2-0 victory against Chelsea.

Moyes feels while his side didn't deserve anything more than a point, he's pleased with their players' discipline and organisation - which has helped Everton concede just 28 league goals all season.