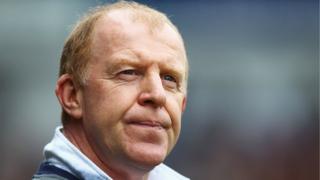 Former Sheffield Wednesday boss Gary Megson tells BBC Sport's Pat Murphy that he would love the opportunity to return as the Owls boss.

Megson was sacked by chairman Milan Mandaric despite the team being in third place in League One and having just beaten city rivals Sheffield United.

The former Bolton boss says he has received a lot of support and many people think "some of the things that go on in football are strange".