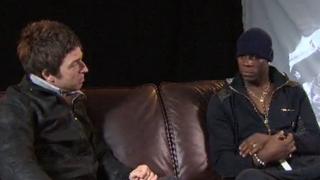 Manchester City forward Mario Balotelli says City fans should treat Carlos Tevez just as they did before the striker's five-month absence from the team.

Watch the full interview on Saturday's Football Focus at 1215 GMT on BBC One and this website.

You can also find out more about the interview between Gallagher and Balotelli by reading Dan Walker's behind-the-scenes blog.