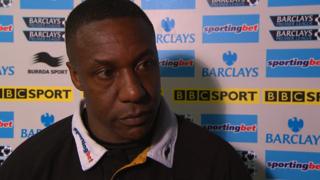 Wolves manager Terry Connor believes his side were unfortunate to lose a tight game against Wolves, with the ability to make the most of their chance key to Rovers' 2-0 success.

Connor says his players remain upbeat and are confident of retaining their Premier League status after a performance that "just lacked a cutting edge in the final third".

Wolves are two points off the bottom of the table in 19th place, but just a point behind Bolton in 16th.