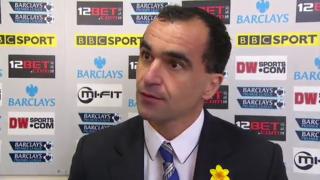 Manager Roberto Martinez admits "frustration" as Wigan draw 1-1 with West Brom in the Premier League despite "dominating" the game.

The Spanish coach tells of the "pride" at his team's performance, believing that they will avoid relegation if they continue in that manner.

James McArthur tapped Wigan in front from a couple of yards after the break before Paul Scharner headed Albion level.