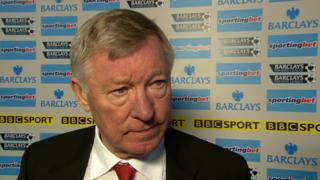 Sir Alex Ferguson says he is pleased to have lowered the goal difference between Manchester United and title rivals Manchester City after a 5-0 win over 10-man Wolves, a victory Ferguson describes as far from comfortable.

The Manchester United manager says it was not a great performance from the league leaders, but is pleased with his players' clinical finishing.