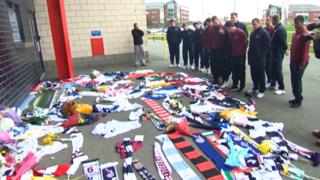 Sunderland's squad visit the Reebok Stadium to place a shirt at the vigil site for Bolton midfielder Fabrice Muamba who is critically ill after suffering cardiac arrest during Saturday's FA Cup tie against Tottenham.

Striker Nicklas Bendtner, a former team-mate of the England under-21 international during their time at Arsenal, describes the midfielder as "the sweetest guy you'll ever meet".

The Sunderland team are in the North West ahead of Tuesday's Premier League match at Blackburn.